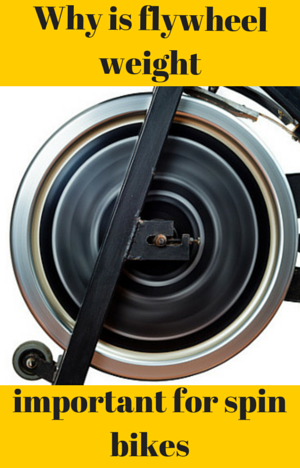 When you look at spin bikes on the internet there is a lot of talk about the importance of the flywheel weight. Its’ weight is one of the main differences between a standard upright exercise bike. It seems to be accepted that the heavier it is the better it is.  But why?

The flywheel is a big wheel usually situated at the front of the bike. It is perimeter weighted to give it more momentum.

As you turn the pedals the flywheel turns. It is connected to the pedals by way of a chain or belt drive. The heavier the flywheel is, the harder it is to get turning and once you have it turning the longer it will take to slow down because of the momentum that has built up – it carries on turning after you’ve stopped pedalling.

This arrangement was first introduced in the 1980s. It gave you a similar riding experience indoors to the one you have when riding an outdoor bike.

Without the weight of the flywheel it is too easy to pedal and the wheel stops turning as soon as you stop pedaling which is not what happens when you ride a bike.

Outdoor Bikes And The Flywheel

This is the experience that a heavy flywheel provides for the user on an indoor bike. The feel is much more natural and it won’t feel like the effort is too easy or you are riding in the wrong gear.

The flywheel also provides a more fluid cycling motion. Without the weight of the flywheel, pedaling is more jerky and is more of an up and down motion which can add pressure on to your joints and can make you more susceptible to injury.

With a light flywheel you are constantly adjusting your pedalling speed. The pedals will speed up on the down stroke and then slow down as you move round the bottom and top of the pedaling cycle. This is because there is no weight to keep them turning and so they will slow down quickly.

A heavy flywheel can also smooth out any irregularities that might be caused by the friction on the resistance pads not grabbing the wheel evenly due to poor adjustment or wear.

The weight that the flywheel begins to be heavy enough to givee these benefits on a spin bike is around 30 lbs where the cycling motion becomes fluid and natural. As the flywheel gets heavier the motion becomes more smoothed out but it gets harder to get it started and it takes longer to slow or to stop the flywheel.

The heaviest flywheel I have seen on a bike is 66 lbs and this is really for the very seasoned trainer who is in training for endurance events.  It makes getting started more demanding and much more effort is required to stop.

Most spin bikes are in the range of 30 lbs to 50 lbs and for most people this range is fine for providing them with the smoothness and workout they want.

The big benefit of the heavy flywheel is the natural and smooth riding motion that gives a better and more efficient riding experience. This helps to prevent injuries to your joints that could come from the choppiness of the up and down motion which is due to changes in speed that happen when you have a light flywheel in particular when out of the saddle pushing against the resistance.

But what about bikes such as the Keiser M3i with a light flywheel. It only has an 8 lbs flywheel and that is at the back of the bike rather than at the front.

Despite the light flywheel it still produces a smooth and natural ride and most customers give it top marks. It uses a different approach to getting the momentum needed by increasing the speed the flywheel is turning than on traditional spin bikes.

This additional speed produces the same feel (of momentum or kinetic energy) for the customer when riding the bike as the heavier flywheels with the usual chain or belt drive configuration. It has a much larger pedal belt wheel giving a higher gearing ratio.

It has the momentum to keep the pedals turning so they don’t slow too much to help keep a cycling motion while pedalling and prevent an up down motion. It does come at a cost with you not getting much change from $2000 (there are a number of other qualities to the bike including belt drive, magnetic resistance and it looks great too).

The important thing is that both approaches is they provide a fluid natural ride when you are working out or training.

It can be done by weight or speed – as a general rule to get the required momentum a heavier flywheel is a more economical than the faster flywheel.

30 comments for “Why Is The Flywheel Weight Important For Spin Bikes?”