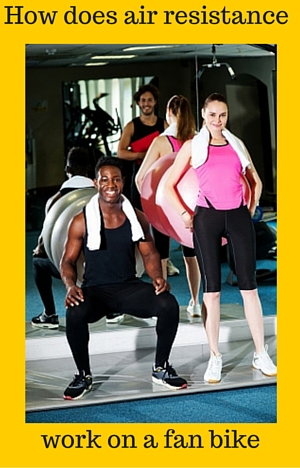 Fan bikes are a great way to get a tough workout. They can really get you exhausted (destroyed) fast.
When you first try them out it can be difficult to pace yourself and you can end up burning yourself up before the end of your workout. They are often referred to as torture machines rather than exercise equipment.

It’s for this reason they can be great for high intensity interval training and conditioning. One of the reasons is the air resistance the other is that you are working your arms and legs at the same time.

How Is Air Resistance Used

Unlike other upright bikes fan bikes don’t commonly have a a way to the adjust the amount of resistance manually or automatically to make it harder or easier depending on what you want to achieve in that part of the workout.

The resistance changes dependent on how fast you pedal and/or move your arms. This is what can make them so tough and to gauge how much energy you are expending or need to use up – getting the pacing right is difficult. It’s this variability in resistance along with working your arms and legs at the same time that can really burn you up fast.

The Mechanics Of It All

The pedals and handlebars are joined together and both are in movement at the same time. They move the fan wheel that is at the front of the bike. it is just like a fan with blades that move through the air.

The resistance is caused by the blades moving through the air. At low speeds there isn’t much resistance as you aren’t trying to push too much air out of the way. The faster you pedal the more air the fan blades are pushing out the way and thereby more resistance you are having to pedal against.

This does provide a different workout to that you get on a spin bike where the resistance can be set regardless of the speed you are pedaling. This way you can get a hill climb type workout indoors like you do on road bike.

A spin bike does miss out on the increase in resistance you get outdoors as you get more resistance the faster you ride through the air and wheel on the road which is what you get with the air resistance of the fan bike.

Of course, not all fan bikes are equal as to the amount of resistance you get as you pedal faster. The bikes have different size fans and blades. The smaller the fan the less resistance there is, as you’d expect.

It does make the bikes simple to use but takes a little getting used to how to pace yourself. It is this type of resistance that makes the bike popular with CrossFitters and people with home gyms so they can get the maximum effect from their HIIT in a non-impact way to get the conditioning training they want. Their favorite choice of bike the Assault Air Bike – an outstanding bike.

The fan is connected directly to the pedals with either a fan or belt drive and it is direct so it only is moving if the pedals (and handlebars) are moving. There is no help from the fan as you get with a weighted flywheel you are always pushing and need to look after your stroke yourself to keep good form.

Air resistance is a simple but effective way to add resistance to your workouts. It certainly can work you as hard as you are prepared or able to push yourself.

Image courtesy of stockimages at FreeDigitalPhotos.net