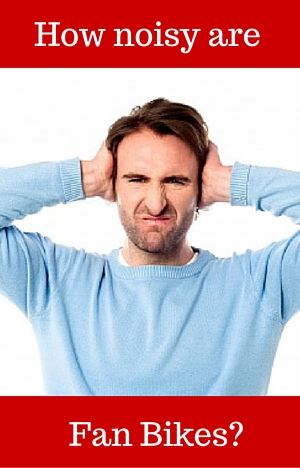 Fan bikes are a great way to get intense workouts, burn calories and get in shape. They are tough machines that can test you to your limit if you want or you can take it more moderately too.

They are different to other indoor exercise bikes in that resistance is provided by the fan wheel. The faster you pedal the more resistance there is as the fan moves quicker through the air having to push more out of the way.
When pedaling moderately there isn’t too much noise coming from the fan. As you increase your pedaling speed the faster the fan turns creating more noise.

How Noisy Are The Bikes

The level of noise is similar to the level you get from an electric fan which also gets more noisy the faster it goes. This is as loud as modern fan bikes get.

The interesting thing on this is that the more expensive fan bikes like the Air Assault bike fan noise is louder than the cheaper bikes like the Stamina ATS Air Resistance Exercise Bike.

You’d think the more expensive the quieter they’d be. The difference is that the fan blades are bigger on these bikes. The blades then push more out of the way leading to more noise as you move the blade around. It also results in more resistance too, to give a tougher workout.

The cheaper fan bikes come with belt resistance which allows you to manually adjust the resistance which can also cause some noise similar to the friction resistance on spin bikes a sort of a loud whisper when properly adjusted and maintained.

The other source of noise (other than your heavy breathing from your exertions) is the drive. There are two types drives – belt drive and chain drive.

The belt drive is almost silent whereas the chain drive makes a soft clinking noise as it moves over the sprockets like you’d hear on an outdoor bike. This is not likely to disturb you or others.

One more source of noise is on the Air Assault Bike is the computer. It makes a loud beep that can be heard in other rooms that and be disturbing during recovery periods.

What About The TV

The noise from the bikes can mean that you can’t watch a TV without turning the volume up a little to be able to hear the dialogue or hear music videos. It won’t be a lot like wanting to hear it over an electric fan on full. People in another room won’t really be disturbed.

… And In The Dead Of The Night

It may become a problem in the quiet of the middle of the night when others are sleeping. Others that have tested this have said they’ve not disturbed them when others are sleeping upstairs but this is going to depend on how light they are as sleepers – in the majority of cases you are going to be able to get in your workouts while others sleep during the night and you should be able to manage it while the kids are napping during the day (if you get the chance).

And If You Live In An Apartment

On an upper floor of an apartment building the fan noise of modern bike is unlikely to disturb people below during the day. There can sometimes be a vibration that comes from the pedaling and fan that can transmit through the floor that can be disturbing. This vibration can usually be simply eliminated by putting the bike on a rubber mat that absorbs the vibration so none is transmitted through the door.

If Even That Noise Is Going To Be An Issue

If noise is going to be an issue and you want to be able to train indoors there are alternative quieter types of indoor bikes. In particular for those wanting a serious workout then spin bikes that use magnetic resistance can give you that. The resistance has some variability as you pedal but most of it is provided by adjusting the closeness of the magnet to the flywheel.

These bikes are very quiet as many also have a belt drive so that usually the loudest noise is the breathing of the rider. You can see the best spin bikes that have magnetic resistance here.

Fan bikes aren’t the quietest of exercise bikes but they aren’t very loud. There is no pounding like you get with treadmills that can disturb a household and neighbors when in an apartment.

It does depend when you are going to use it as to whether the fan noise is going to disturb others – in the same room it can but in another room they may hear it but only faintly and in most apartments it won’t transmit through the walls.

P.S. If you are looking for the best fan bike to push you to and past your limits and keep on doing it then check out the review of the Lifecore Air Assault Bike – it is built for those that want to take their training very seriously – the harder you push the harder it pushes back and leaves you gasping (if you want) – it isn’t the quietest bike out there but it isn’t that loud either.

(Image courtesy of stockimages at FreeDigitalPhotos.net)