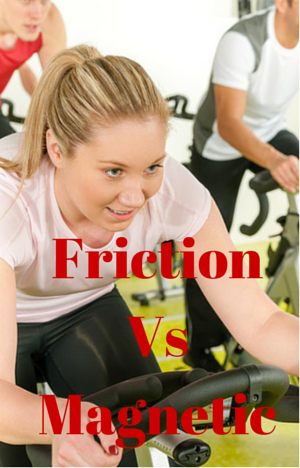 Resistance such an important part of getting a good workout.

The more resistance there is the more intense it is and it can help in building strength too.

In spin bikes the resistance is turned up to give the same feel as riding up a hill.

And it can be turned down for the feeling of traveling down a hill.

Also it can help you train for hill climbs indoors out of the rain and snow or when its too hot.

There are 2 ways of applying resistance to the flywheel of the bike to give this effect. In this post I’ll look at how they compare side by side and look at which is better in each of the categories. But first off I’ll explain how they work. There is a summary at the bottom or you can checkout my buying guide for a quicker explanation of the differences.

Friction uses felt wool pads that rest on the flywheel. You tighten a knob that is connected to the pad and that pushes the pad on to the flywheel harder thereby creating more resistance.

Bikes that use friction resistance tend to cost less than those that use magnetic resistance by a few hundred dollars with all other features being equal. Magnetic resistance is more costly to manufacture and there are perceived benefits from it as well thus resulting in a more expensive price. I explore the benefits in the rest of the post.

Friction resistance makes a quiet shooshing type sound as the flywheel passes through the pads. It is like a loud whisper when properly lubricated. When not properly lubricated it can develop into a loud squeaking sound.
Magnetic resistance is silent. There are no pieces touching each other so there is nothing to rub together to make a noise. So a big plus here .

With friction the pads are going to wear out over time from use. They normally need replacing every 6 to 12 months. As they wear down they will give off some small amounts of wool dust.

To keep them from resisting too hard against the flywheel they also need to be lubricated with a silicon based oil as required. The bike and floor may need to be cleaned up due to the dust and lubricant dropping or a rubber mat can be used to protect the floor.

The pads and the pressure they apply may need to be re-aligned from time to time as they can get out of alignment from use, in particular the calliper style pads as they are more likely to move around in just the same way as bike brakes do. It is important to have them in alignment so that uniform level of resistance is applied to get a constant cycling motion and prevents a bumpy ride..

There is no dust from magnetic resistance. Nor is any lubricant required. There is very minimal maintenance required at all. There may be some maintenance after a few years to tighten up screws or wires etc.

The resistance with friction pads is described as incremental and continuous in product descriptions. It can go from none to impossible to pedal against by turning the tension knob. As you turn the knob more resistance is applied to the flywheel. There can be issues with some bikes if this has not been properly set up in the manufacture where it goes from easy to impossible in just a small partial turn of the knob. This is a quality control issue rather than a problem with this type of resistance.

If you need to stop the wheel quickly you either push down on the tension knob or a lever and the pads act as a brake on the flywheel.

Magnetic resistance in theory can be set to be hard enough to stop the wheel from turning or hard enough that no one can turn the flywheel over. In practice this is not the case with people being able to turn the wheel at the hardest levels of resistance such as with the Diamondback 510Ic where the top level of resistance is not hard enough for the most experienced cyclists and spinners. However most people will find that it is more than enough for their workouts. To stop the wheel quickly bike with magnetic use friction pads where you then push down on a lever to stop it.

You also need to estimate the amount of resistance you require for your workout with magnetic resistance too. But the big difference is that there are levels of resistance are often shown on a console so you know the level you are at and therefore you can come back to it easily at a later time. The resistance level does change as you pedal faster as the resistance is greater speed as this is how Eddy Currents work – the faster the metal object going through the magnetic field the greater the resistance which you could argue is similar to what you get as you ride faster on an outdoor bike you get more air reststance.

So how do they measure up. Magnetic resistance has a lot of advantages over friction – its quiet, no dust, minimal maintenance, no replacement of pads and you get levels of resistance you can use for setting resistance.
Friction wins on the cost as it is much cheaper, it gives a constant resistance and it has harder resistance when compared to the way magnetic resistance is used in spin bikes.

62 comments for “Magnetic Vs Friction Resistance For Spin Bikes”