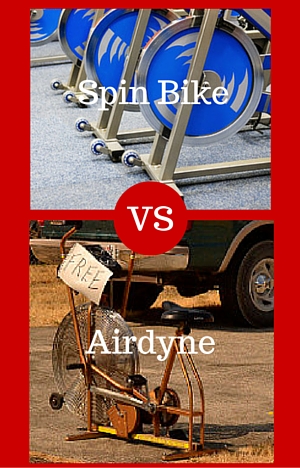 These 2 exercise bike types are rugged and robust. They’re designed to give you as tough a workout as you can handle or want.

Airdynes have seen a rise in their status recently too, with them being in vogue at CrossFit gyms for high intense workouts. It has the reputation of being a machine of torture more so than spin bikes. It is definitely a piece of exercise equipment that people love to hate. Even calling it the misery machine.

People talk much more fondly of spin bikes even though these can leave you exhausted in a ball of sweat too.

These bikes are ridden in a similar fashion to a bike in that you sit on a bike seat, lean forward on the handlebars and pedal with your feet.

See how they compare in our informative head to head.

The basic difference here is the spin bike has a flywheel at the front and the airdyne has a fan wheel.

The flywheel is heavy, made from iron/steel and can be perimeter weighted. This weight helps to keep the pedaling motion circular by pulling the pedals round in 360 degree motion. This helps it to feel more like a road bike.

The pedals on the airdyne are used to push the fan round with the resistance provided by air as the blades of the fan move round. Its this resistance that make this bike so loved to be hated.

The handlebars on the spin bike are fixed in place like you have on a bike allowing you to grip them for leverage and / or lean on them as you would a bike.

Like an elliptical bike the handlebars on the airdyne move back and forth which push and pull them while you pedal providing a workout to the arms as well as the one you get with your legs. You can rest your hands on them and just work your legs but the arms still continue to move. Or you can use your arms only to move the wheel giving your upper body a workout.

Again the spin bike design is for a more road bike experience so you can lean on the handlebars and grip them as you would when riding a bike outside. The airdyne is designed to work more of your body.

For both bikes the seat can be adjusted upwards to get the right height to give provide the proper distance between the pedal and seat for the right amount of extension of the leg for an efficient and safe workout.

The spin bike also has adjustment to horizontally move the saddle. You can also move the handlebars vertically and in some cases horizontally too. This is to get the bike to fit you properly to get the maximum results from the workout and it also helps in preventing injury. You can also use the adjustments to get as close as possible to the set up of your road bike

As the handlebars move with an airdyne this horizontal adjustment is not as critical although other types of fan or air bikes do cater for this to provide a a better and more ergonomic fit.

The spin bike provides as close a ride as you can get from an indoor bike to a road bike with the heavy flywheel pulling the pedals through a complete 360 degree motion just as you get when cycling outdoors, fixed handlebars and manually variable resistance.

The riding motion of the airdyne doesn’t come as close as the spin bike does to a road bike as there is a bit more up and down motion of pedaling as it slows at the top and bottom of the cycle due to lower inertia of the flywheel and moving handlebars.

In this respect the spin bike is more likely to be softer on the joints as it promotes better form of pedaling especially for the beginner.

Both bikes promote more cardio and endurance than strength but as the resistance increases on both you are pushing harder and thereby building some strength in the legs (and arms in the airdyne).

The spin bike does give you more of an opportunity to build strength as you can turn the resistance up manually and not have to cycle faster to do it, so you can do it for longer periods of time before without burning as you are more likely to do on the airdyne to get the resistance levels up.

The Airdyne use air resistance against the fan to provide something to push against. The faster you go the harder is the resistance i.e. goes from easy to very hard as you pedal faster. There is not the option of varying resistance levels any other way. This riding against resitance and high speed helps it to earn its nicknames.

With spin bikes you normally twist a knob to increase the resistance in increments to provide a similar experience as to the gradients you experience on an outdoor bike. It does make it easier to ride at certain levels of resistance but at a lower RPM to build endurance rather than just cardio capacity. You can also at the higher resistance levels come out of the seat and pedal standing to work the legs harder.

Of the 2 bikes the Airdyne is the noisier one. You hear the air whooshing as it being pushed by the fan as well as some noise from the chain drive. It is like an electric fan going at full blast

The noise from spin bikes is less as they don’t have the fan. With the majority of models there is some noise from the drive and from the resistance pad that pushes on the flywheel and is quiet enough for use at home (as is the airdyne). But for a quieter riding experience there are those that have a belt drive and magnetic resistance which are very quiet.

This is dependent on the model of bike you buy particularly with spin bikes as there are many different manufacturers, unlike airdynes which are manufactured by Schwinn.

Having said that they do all tend to be basic (and not all spin bikes have one anyway) giving you information like power, rpm, speed, distance, time and heart rate (when paired with heart rate monitor). These are helpful in keeping you in the best zone for fitness or weight loss.

There are a number of claims about how many calories you can burn riding a spin bike or airdyne.

The cardio workout for the spin bike is the legs and core, it does give you the ability to move in and out of the saddle to add more work into the workout.

With the airdyne you can also be working the arms and legs to be able to work harder and get a more intense workout and burn more calories. It is also great for conditioning and is used by many MMA fighters for that reason. You may find with HIIT that you work harder on the training interval but are slower during the recovery part due to the additional work put in.

In the end burning calories and weight loss will depend on the amount calorie put in as well. With Airdyne you need to be more careful with your food as there can be the temptation to eat more due to the intensity of the exercise making you feel hungry.

The Airdyne will work your arms, core and legs hard and you can get a very high intense workout and there is probably not a better piece of exercise equipment than this.

The spin bike can give you are variety of workouts that are similar to riding a bike which is good for those who want longer endurance type workouts as well as intense ones and for those doing indoor training for cycling. A spin bike can be used for high intense interval training too. It is more for the legs and core than your arms. It’s real strength is being able to have cycling style workouts that take advantage of the changing gradients using resistance and cycling at various tempos

(Photo credit for airdyne picture only, other picture and wording added.

14 comments for “Spin Bike Vs Airdyne – A Thorough Comparison”