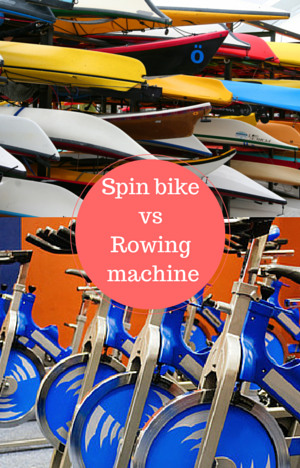 Spin bikes and rowing machines both offer the ability to get a low impact cardio workout from the comfort of your home or at the gym.

The rowing machine works the upper and lower body and the spin bike works mainly the lower body with a little upper body work.

Spin bikes have been popular in gyms and homes for many years, whereas rowing machines have almost seen like an afterthought in gyms. But that is been changing recently with it seeing a something of a surge in popularity and with good reason too.

In looking at these 2 cardio fitness equipment types I’ve considered three areas: the type and quality of exercise, how practical is it for your home and what you get for the price.

You don’t have to be too concerned about making the wrong choice as either of these 2 pieces of equipment can help you reach your fitness and weight loss goals.

A spin bike is easy to get started on as it is similar to riding a bike, in fact it probably is easier than riding a bike as you don’t have to keep your balance. There is a little bit of getting used to turning the tension knob or lever to increase and decrease the amount of resistance you are pushing against to simulate the hills, but that is about it.

Rowing is not something everyone is familiar with as they are cycling. It isn’t difficult to get the hang of but has a bit more of a learning curve than a spin bike due to less experience with it and slightly more involved movement as you use your upper body as well as legs.

The motion is to push with your legs, then pull the handlebar with arms using your back too, and then return. There is a technique to learn to get the most out of it. Also you need to get the pacing of the move so you don’t burn out too soon or don’t go fast enough to get the full benefit from it.

Both machines typically don’t have workout programs built in to them or something that forces you to train at a certain pace, unlike a treadmill where it has a turning belt, so you do need to ensure you keep up your intensity on your own by using the console numbers or music or a video to keep you on track.

In terms of burning calories the spin bike is estimated to burn more than the rowing machine at the same level of work but you can work all your body with the rowing machine which can lead to a higher calorie burn with more being burned after the workout.

It does depend on the workout and how hard you push yourself to complete it. Some of it will also come down to which type of exercise you enjoy the most (if that is the right expression!).

As with all calculations of calorie burning, how many you burn depends on your fitness, weight, body composition (lean muscle and fat) and the type of workout (HIIT, steady state, etc ) as well as the intensity you are working at.

Both machines are easy on the joints and shouldn’t cause issues with them although you may find the rowing machine is harder on your knees when you push backwards, where as you won’t get that same pressure with a spin bike.

To make the workouts harder you can increase the resistance on the flywheel when using a spin bike to give you a workout similar to climbing hills. This is done by turning up the tension knob.

With rowing machines it depends on the type of machine you buy: with water and air models you can increase the resistance by rowing harder or by turning up the dampener, with magnetic and hydraulic models you increase resistance by turning a knob or using the console. Air resistance models are the most popular and preferred by rowers.

Injuries both tend to be to do with over use injuries rather ipact injuries and this is to with bad form and not setting the machine up properly (more spin bike as you need to get it set properly for oyur height). In addition with a spin bike oyu need to be careful of the pedals as the flywheel pulls them through as they are fixed by the drive on most bikes which can cause injury when wanting to get off if care is not taken to stop the flywheel and pedals.

For a spin bike you are usually looking at paying more to get the one like the Schwinn AC Performance Plus one of the most popular bikes in gyms.

You can get more affordable models for both with them starting much less but you get less features, they aren’t as durable and don’t come with a console. With rowers, in particular you get models that may not be up to what you want from them especially if you are going to be using them regularly and for high intensity workouts.

The manufacturers of these equipment focus more on performance rather than extras. You don’t get fans or built in workout programs or speakers. You get equipment that you can workout as intensely as you want.

The consoles are basic where they measure speed, time, calories, pace or RPM, watts (in some cases) and if they can work with a heart rate monitor then your heart rate. Many of them do not give you the ability to upload your results to an internet account or computer.

Both machines don’t make huge amounts of noise. The air rowing machine is the noisiest type as you hear the flywheel turning as you pull on the cable whereas you don’t get as much noise from the spin bike flywheel turning.

The noise you hear from spin bikes depends on the type of resistance and drive they have. The quietest ones have a magnetic resistance and belt drive and are very quiet and won’t disturb others in the home. The ones that make the most noise have friction resistance and a chain drive but even so they are relatively quiet and are unlikely to disturb people in another room to where you are exercising.

The rowing machines need a space of around 9 ft by 4 ft to be properly accommodated and a spin bike is around 5 ft by 2 ft, so require less space. You can buy compact rowers but there is some compromise on rowing style and they can feel a little cramped

Spin bikes typically can accommodate people up to around 350 lbs but a rowing machine like the Concept 2 can be used by people weighing up to 500 lbs. In terms of height there is little adjustment required by a rowing machine but with a spin bike you need to adjust the seat and handlebars using the adjustment knobs. It’s quick and simple but it is an extra step(s).

The rowing machine will work more muscles as it works both the upper and lower body. There tends to be more of a learning curve in getting used to the rowing motion than you get with a spin bike as most of us learned to ride a bike when we are young and don’t forget how to do it.

Rowing machines do tend to take up more room then spin bikes unless you look at a compact one but then there are compromises made on the quality of the stroke and thereby the workout.

The rowing machine does work more muscles than a spin bike and it is possible to burn more calories overall but not everyone enjoys rowing. It does depend on how often and the type of workout you want that determines which one will be the most beneficial to you for both fitness and weight loss.

12 comments for “Spin Bike vs Rowing Machine – How Do They Measure Up?”