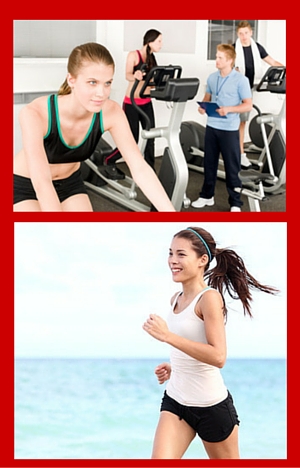 Both running and using a spin bike are excellent ways to improve cardio health, help with weight loss and with mental health too as they can help with stress management and relaxation.

Running is one of the most popular ways to get exercise (if not the most) with many people hitting the pavements and trails every day to reach fitness goals or lose weight and for enjoyment too.

In the same way there are many who prefer the spin bike to achieve these aims.

The obvious differences between the two are where you do it, one is on a bike and the other just uses your body by putting one foot in front of the other for training. With running you get the fresh air along with dodging traffic and/or bad weather (unless you are using a treadmill) whereas on the spin bike you’re inside in the comfort of your home or gym out of the traffic and bad weather. The scenery can be boring indoors but you do get to control the conditions. With running you also get to travel somewhere even if it is in a loop from your house back to your house it can have more of a feeling of getting somewhere.

One of the reasons for many people doing any form of exercise is a way to burn calories. In that respect you want the one that is going to give you the biggest bang for the buck – or which one burns more calories for the least amount of time spent exercising.

Unfortunately it isn’t a straightforward as saying one or the other because it depends on intensity as well as length. It does mean that it is inconclusive as to which is better but what studies do show that both are great at burning calories which can help in controlling and reducing weight.

It’s important to remember that to lose 1 lb of fat you need to burn 3500 calories.

Based on various studies it seems that all being equal that running will burn more calories due to it being weight bearing. From Nutri Strategy they quote these numbers:

An average sized person running at 5 mph can burn 472 calories over 60 minutes. While spinning at a leisurely pace they can burn 325 calories. Ramping it up if the person is running at 7.5 mph they can burn 732 calories in an hour and to do that spinning they need to be spinning “rigorously” for the hour.

You are also going to need to change things up as your body tends to adapt to any activity to make it more efficient to do anything it does. This means it uses less calories to do the same amount of work which is great when you want to conserve energy but not so good when you want to burn calories.

There is a lot less impact on your legs on a spin bike than running as you are not supporting your weight on your legs nor lifting and returning the legs to the ground causing an impact.

When the spin bike has a heavy weighted flywheel there can be close to zero impact on the legs as the momentum helps to pull the pedals all the way through the cycling motion so there is no up and down choppiness you get on exercise bikes with a lighter flywheel.

There is less stress on the joints with spinning and can be used to help keep your fitness levels up when injured due to the low impact. It does mean that it doesn’t help with strengthening the bones in the legs that you get with running.

Running has a reputation for injuries and there is a higher chance of it due to stress put on the joints from the repetitive nature of the impact on the joints.

Spin bikes allow you to adjust the seat and handlebars so that you are seated in the right position for the best and most efficient workout. The heavy flywheel, as discussed earlier, helps to take out any choppiness in the cycle so that you have a 360 degree cycling motion.

However, the pedals tend to be wider apart than your hips which is unnatural and means your feet, knees and hips aren’t properly aligned which results in a slightly unnatural movement and cause some stress. The best bikes have a distance between the pedals below 160 mm (See Spinner NXT). This is known as the Q Factor.

With running you don’t have equipment that can help you with form or hinder it for that matter but most people have picked up bad habits as they grow up putting unnecessary stress on their legs and joints. There is also much discussion as to what good form is with various different school of thoughts but with most now looking for mid or toe strike rather than the heel strike that running shoes tend to be designed for. Many people continue to heel strike which put more stress on the joints and increases the chances of injury.

In this respect a spin bike is less complicated and the more you ride on a good spin bike that is properly set up the better your form is likely to be whereas with running many people need to be trained to run with good form to prevent injury and an efficient running style.

For spinning and indoor cycle training you need a spin bike. When you buy one for the home it can cost you from $300 to $2000 and beyond. If doing your workouts at the gym you are going to have gym fees and possibly spinning class fees on top of that.

With running you don’t have that but you may join a club to help with motivation and training plus you may enter races which is an additional cost. However, you don’t have to do this and the cost is usually considerably less than a gym.

With running it is more important to buy good shoes as this can help in preventing injury. With spinning you can buy specialist cycling shoes that clip on to the pedals but you don’t have to as most bikes cater for athletic shoes with toe baskets.

On top of that for both you may want to buy clothing for their sweat dispersing properties etc.

I guess the other cost to consider is the medical costs of injuries and that is likely to be higher with running as there is more chance of injury due to its repetitive nature and being high impact.

Benefits of Spinning For Running

Running itself can bring gains but mixing up the training with spinning workouts can help increase progress while preventing injury or burnout. It great for fitness, improving range of motion and is done inside away from the bad weather in winter.

Spinning can be a great way to cross train to reach running goals with its high intensity intervals switching between cadence, strength and position at a low impact saving the legs. The increase in spinning cadence is thought to be able to translate to a quicker running cadence.

When you have the resistance turned up high it works to increase the strength in the legs which can help with running economy (efficient oxygen use) resulting in faster running times and endurance.

It works different muscles providing better muscle balance. The flats and easier hills you develop your slow twitch muscles (aerobic) and on faster flats and steeper hills it is your fast twitch muscles (anaerobic).
This all helps to keep your muscles more balanced thereby preventing injury as well as promoting more efficient running.

It can also help with keeping you lean (or help you to become leaner) as it exercises the upper and lower leg muscles together, which are among the longest and largest muscles, results in calories being burned during the workout and also afterwards. (see Jannine Myers article for more on this) .

It can also help with mental toughness buy pushing yourself through the hurt to complete a tough HIIT work out on your spin bike which can translate to your running especially as you go up a tough hill.

The two activities don’t have to be mutually exclusive as they can help in providing a more rounded fitness and health profile. Mixing them up can help in balancing the muscles which helps in preventing injury. It prevents boredom from doing too much of the same thing. So rather than doing one or the other it best to combine them as part of your fitness routine. There is a higher risk of injury with running than using a spin bike due to high impact nature of running.

In the end it comes down to your personal objectives, which one you think you’d get the most benefit/enjoyment from and sticking with it. You can test your limits with either one.