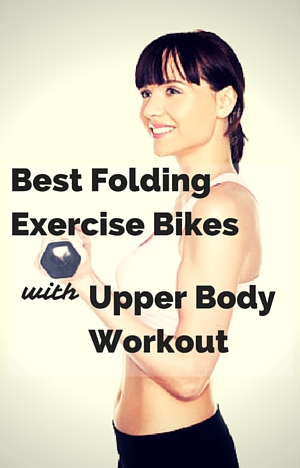 Choosing the best folding exercise bikes with upper body workout built-in has been a tougher and it’s not due to at all to the choice.

It is because there are so few of them to choose from. It seems to be something that the manufacturers don’t consider a priority for folding exercise bikes or even more generally exercise bikes.

Fan bikes are the only ones that are specifically designed with upper body workouts in mind but they don’t fold up and are noisier than bikes that use magnetic resistance.

So far I’ve managed to find only two bikes that have upper body workout capabilities. One it seems it has it almost to be an afterthought and its definitely not for high intense workout and the other one seems to be a new model (which I’ve not reviewed). This other one is proving difficult to get the information to fully research but it is included as it looks like it could be a good choice. I have contacted the manufacturer for more information.

In some respects it may be better to buy some light hand weights to train with as you exercise to get some upper body training. Most bikes are steady so you can cycle without hands.

If you aren’t to steady on just a bike seat, there are semi-recumbent bikes such as the Exerpeutic Recumbent bike with a back rest that is easier to balance on that would work well with small dumbbells to work the arms. Unfortunately there isn’t somewhere to put them when you finish using them – other than putting on the floor or a table that you’ve put next to bike.

The Choices For Best Folding Exercise Bikes With Upper Body Workout Are:

This is a bike that is really for combining work and exercise together with a desk at the front of the bike where the handlebars normally are. It does do a good job at that.

At the back of the bike is a resistant band with two handles. To use them you reach under the seat with both hands. You hold one handle with your by your side and raise the other towards your chest and vice versa – only doing one arm at a time. The manual does advise that you stop pedaling while you do this.

In some respects it is there to release tension rather than a workout but it can be used for a light upper body workout. The bike seat has a back rest which helps with balance.

The band is not connected to the monitor so is not tracked. Overall the bike is well rated by customers. You can read more about the bike here in my review.

This looks like it could be a good folding exercise bike for getting an upper body workout. It has 2 rotating handles at the front of the bike that you move in 360 degrees with your arms. You can use it while you pedal or you can use either in isolation.

It will give you a more intense workout than just pedaling but it is likely to be for beginners and those wanting up to moderate levels of exercise rather than full on intense cardio workouts.

The seat is adjustable to fit a range of heights, the adjustment will be quick to do so it can be used by all those in a household wanting to be more active and to get into shape.

It comes with a basic console that can help to keep you motivated and keep you on track.

The bike has the potential to be a very good choice for those with limited space who want to get in shape and burn calories and generally be more active in a low impact way.

You can read more about the bike here.