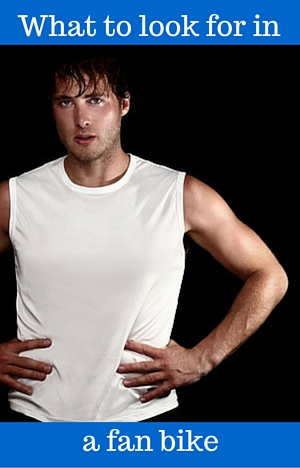 Air bikes are among the simplest exercise bikes you can buy. They are simple but effective in burning calories as well as for condition training for elite athletes. The combination of training the upper body and lower body at the same time and the unique way the resistance increases the faster you pedal.

They cater for all abilities and give them very tough workouts – they’re great for HIIT as well as more moderate levels of training for people looking to get in shape and/or rehab.

Despite their simplicity there are a few things to take into consideration when looking at buying one for your home to make the right choice for you.

What Are Your Fitness Goals

Purpose. What do you want the bike for? How often you are going to use it for? The answers can determine which is the right air bike for you. If you are an elite bike you are going to need one of the more expensive bikes as they have a higher spec and can take the punishment and for a long period of time (Here we are looking at the Assault Air Bike or Airdyne AD6).

However if you are looking for something to give you a tough or moderate workout as you rehab or get into shape then the cheaper bikes (Stamina ATS or Marcy Air Upright Bike or Body Rider Fan Bike) are good options, they are well made but not to the same standard. In between you have the Airdyne AD2, , Marcy Air 1 Bike or Stamina Airgometer – great bikes for the home gym.

The Important Features Of A Fan Bike

Footrests. Although the great thing about fan bikes is that they give you the opportunity to exercise your upper and lower body at the same time there is also the opportunity to exercise each in isolation too.
To this end bikes will have footrests or bars at the front of the bike at the bottom of the bike where you can place you feet off and out of the way of the pedals. You can then work the handlebars with you arms for the upper body in isolation. However, the lower priced models don’t have this which means you need to keep your feet on the pedals if you want this where you could use them to give some more resistance to push against (such as Body Rider Fan Bike and Stamina ATS Air Resistance Bike).

Many of the footrests are bars rather than a full foot rests which means you do need to be a little careful that your foot doesn’t slip off.

Handlebars.These bike do not work in the same esy when you want to exercise just your legs. There is nowhere on your bike to rest your hands and arms. The handlebars keep moving. There is not an option to fix them in place. In this case you can leave you hands on the handlebars or rest them at your sides or on your thighs.

Seat Adjustments. The bikes all give you the ability to move the seat up and down to get the right distance between the pedals and seat – so that your leg is slightly bent at the pedal down stroke within certain height ranges. The companies don’t give guidance as to the range of people’s heights that the seat adjustment can accommodate but here we can we’ve included it based on customer’s findings and when manufacturers have responded to our questions we’ve used those.

The adjustment normally goes up and down on an angle which makes some allowance for the change in torso and arm length the taller you are. However, this can sometimes result in the distance between the handlebars resulting in being cramped up or stretching too far as the angling of the seat port only allows for the average person.
For most people it isn’t an issue and they can make do. However, the Air Assault bike, one of the most expensive bikes on the market (due to build quality) does give you the ability to move the seat horizontally to get a better fit for comfort and efficiency.

Console. All bikes come with consoles to help you keep track of your workout but as you’d expect they do vary in what they display and do. This difference on the whole is reflected in the price you pay for the bike. None of the consoles have the ability to upload your training on to a fitness App or account to track performance over a period of time.

They all track time, calories burned, RPM and distance during the workout. Some only display one measure at a time up, others display them all as you ride. The display screens are large enough to see the measures easily in good light but they aren’t backlit as a rule making it difficult to make out the measures in poor light. The more expensive bikes allow you to set targets and program in intervals.

Drive. There are two types of drive – chain or belt. The belt provides a smoother and quieter ride. The chain is a little noisier and you might notice a slight vibration on the pedals. As a rule belt drives are more expensive than chain drives but one of the most expensive bikes has a chain drive.

Chain drives do tend to require more ongoing simple maintenance to keep them lubricated and properly tensioned. It can be done by the user. Whereas the belt doesn’t need this but it will stretch eventually , then start to slip after a number of years use and need replacing which does need to be done by a specialist.

Weight. The bikes more for moderate types of use can weigh about 50lbs but the ones made for more intense training weigh around 100 lbs and up. The heavier bikes do have wheels on the front to make them easier to move.

Seat. Some bikes do have ones that could be described as comfortable. However, they are bike seats. The meaning of comfort is different from person to person so even though it says it has padding and is comfortable you may still find it uncomfortable.

Fan Size/Resistance. You do get a gentle breeze blowing on you as you pedal but it isn’t that strong. It can help to keep you cool as you exercise. The only time it is really noticeable is first thing on a cold morning but is only really a bit of an annoyance for a few minutes until you are fully warmed up.

Noise. These bikes aren’t quiet but not too much for the home. They are noisier than spin bikes dues to the fan wheel making a level of noise similar to that you get from an electric fan. As with those fans the faster the fan wheel turns the more noise it makes but it is never louder than the electric fan noise you get when on high.

There is no doubt that fan bikes are one of the best ways to get great cardio workout with the working of the arms as well as you legs meaning that you can get very intense workout as well as moderate training.

P.S If you want to see reviews and ratings of the most popular bike check out our air bike compare page for a complete summary of the fan bikes reviewed to date.