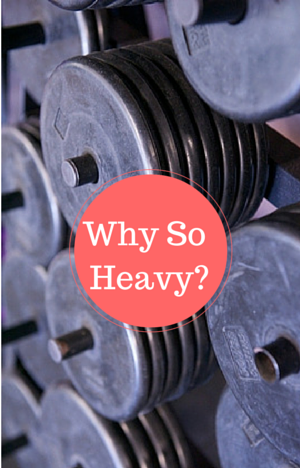 Spin bikes (also known as indoor cycles) are designed to give a similar riding experience to that of an outdoor bike with the aim that you can train the same way.

This includes simulating riding on the flat and climbing the hills. One of the things that has happened to do this is that the spin bike is heavy.

Conversely outdoor bikes are built to be as light as possible and give you the ability to move from side to side especially as you go round corners or are pushing hard.

With spin bikes you don’t get that movement and you don’t go round corners. Moving from side to side is not something you’d want from an indoor cycle as this would feel unsteady and you might be concerned with coming off. You want a steady stable experience when indoors.

When you have a spin bike at home you don’t always have the luxury of being able to have them in one place all the time. When it’s not in use you want that space for getting on with your day to day living so it needs to be moved out of the way until it is needed.

The heavy weight can make moving it difficult. To help with this, taking most of the weight, the bikes have little transport wheels on the front stabilizer bar that you tip the pin bike on to. This makes moving the bike around a lot easier to do and you just need to move the bike to the place you want it. You still do need to be careful to not overbalance.

The other area where the weight can be an issue is when you first get it. Most bikes arrive only partially assembled. You are required to complete the process. One of the steps involves adding the stabilizer bars and this is likely to be the most weighty issue as it involves holding the bike in place while the bars are attached to the frame of the bike. Most companies advise that 2 people should put the bike together for this reason. Fortunately this is only a one off event.

There are a number of reasons why the bikes are heavy. They are to do with the stability and the riding motion.
Tackling riding motion first. To get the cycling motion the same as the one you get on a bike where the pedals move naturally round the pedaling cycle the spin bikes have a heavy flywheel (see my flywheel explanation post here) to simulate the motion you get on an outdoors bike.

The flywheel builds up a motion that helps pull the pedals through the motion so there is no slowing down at the top and bottom of the pedaling. Without the weight it can make the cycling experience choppy and like you are having too fast to fast to catch up with the bike like you can when you are in the wrong gear. As a general rule the heavier the flywheel the more fluid the riding motion (and more expensive the bike) with them generally typically weighing between 30 and 50 lbs.

These bikes can be used for moderate cardio exercise if you want but that is not their main purpose. They are designed to be able to handle hard and intense cardio workouts with people moving in and out of the saddle and cycling hard on the flats and up the hills (by adjusting the resistance levels). It is this way they are being used is the next reason for them being so heavy. They need to solidly constructed so that they don’t rock or shake when you are pedaling your heart out as this can be disconcerting to say the least and can put you off your workout, also they do need to built to ensure they don’t actually tip.

A third reason is that they can be adjusted for a number of different heights up to 6 ft 10 inches in some cases (See Spinner NXT) and also be suitable for weights up to 300 lbs (dependent on model).

Looking at the actual bikes that I’ve reviewed on this site there is a wide range of weights. The highest rated bike (not because of the weight)  the Keiser M3i is a premium bike but is also one of the lightest bikes weighing in at 85 lbs due to a light flywheel – it does give a great stable workout experience but the riding motion is a little different to the standard spin bike.

The Spinner Sport is another lightweight bike comparatively weighing in at 80 lbs with a flywheel weight of 31 lbs. This is a beginner bike but it will keep you stable and give a good ride all the same.

The heaviest bike reviewed to date is the Sole SB900 weighing in at 160 lbs with a flywheel weight at 48 lbs and max user weight of 300 lbs. It costs less than the Keiser but it is also rated well for a smooth natural pedaling motion and there is no concerns with it moving about as you ride it. For a heavy bike it does have some of the worst transport wheels as they are partially covered making it possible for them to get jammed in the pile of carpet.

So the reasons for all that weight are to give you a smooth and steady ride that is similar to riding a bike outdoors. Which is interesting as note above much of the attention given to outdoor bikes is to make them as light as possible but there are different factors in play, in particular you don’t go anywhere when on you get on your spin bike!