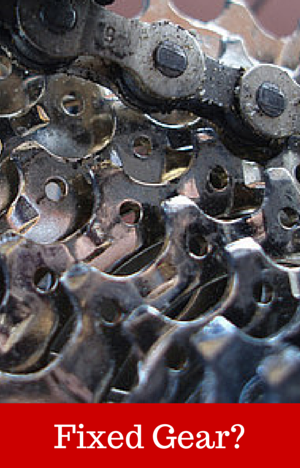 One thing you notice when first new to spin bikes and indoor cycles is just how many of them have a fixed gear. Unlike with outdoor bikes where most give you the ability to coast with only a minority of bikes having a single fixed gear it is the other way round with spin bikes.

What Is Fixed Gear?

A fixed gear means the pedals and flywheel are “fixed” together. When the flywheel is in motion the pedals are turning so there is no coasting. The spin bike flywheel continues to turn due to the inertia of its heavy weight which helps to pull through the pedals the fully cycle to give a fluid riding motion and helps to keep the cadence (RPM) up especially at low resistance levels.

What Is Smart Release?

The obvious benefits of the smart release includes that it is easier to get off the bike, it doesn’t take any getting used to and there is no pedals bashing into your legs.

It can save your joints when you are trying to stop especially the knees and ankles as you aren’t pushing against the force generated by the flywheel (you aren’t supposed to stop the flywheel like this to avoid injuries).

From a fitness point of view it is easier to coast and you may not get the full benefits of a workout by taking it too easy. Especially at lower resistance levels you may coast and not get the benefits of the higher cadence you can achieve. You miss out on the cardio benefits as well as the chance to burn off some calories.

Bikes with this technology do cost more with it being included on more expensive models and there were no bikes below $1000 that I could find.

The ride on these bikes can sometimes be not as smooth nor as natural as you get with a fixed gear bike, also if not properly maintained the pedals can slip which you definitely don’t want when you are up out of the saddle.

There is more maintenance required on these bikes to keep the Smart Release properly adjusted otherwise it makes the ride uncomfortable. It’s not difficult but you do need to be tightening or releasing it to keep everything working properly.

In fact some people find the ride is just not what they want due to the variation it can cause that they tighten it up so that the bike becomes a fixed gear bike effectively.

At present the only bike I’ve looked at in detail for home use that has this technology is the Schwinn AC Sport which is 1 bike out of 25. It is a very good bike overall and if you want the benefits of this bike you do have pay extra for it. The bike comes with magnetic resistance.

It can be hard to imagine there are any pros to a fixed gear when you first get on the spin bike and you realize that you just can’t stop pedaling and get off the bike.

You have to wait for the flywheel to stop or push the emergency brake when you need to get off quickly.
The cons of the fixed gear is that it takes some time to get used to, you have to be careful when getting off the bike that you don’t injure yourself with the pedal hitting your leg or trying to stop the pedals turning with your legs causing an impact injury.

The advantages over the smart release bikes are that there is less maintenance requirements and on the whole costing less on a like for like basis for example a comparable bike to the Schwinn AC Sports the Sole SB900 comes with a console too.

There are some training advantages and fitness advantages. This is the reason that the bike is popular specialist spin bike and indoor cycling companies. (See http://sheldonbrown.com/fixed.html for a good explanation of outdoor bike fixed gear). It comes down to the fact it is easier to get more out of the workout than you would if you had the option for coasting especially as your reduce the resistance.

As you reduce the resistance you can increase your cadence to get more of a cardio workout helping to increase speed, agility and a smoother cycling motion all adding to improved fitness levels as well as burning off more calories. You are getting the maximum benefit from the bike whether increasing or decreasing the resistance.

So, spin bikes and indoor cycles have a fixed gear because they are cheaper to manufacture, require less maintenance and push you harder. You don’t have the opportunity to coast as you can with a bike with Smart Release technology.

They can be difficult to get used to at the beginning and you have to be careful when stopping not to cause injury as you slow down or step off the bike.

After a few rides with fixed gear you might become a fan and even want it on your outdoor bike too.

5 comments for “Why Do Spin Bike’s Have A Fixed Gear And What About Smart Release?”